Step into the Light: Education and Engagement on Human Trafficking Issues 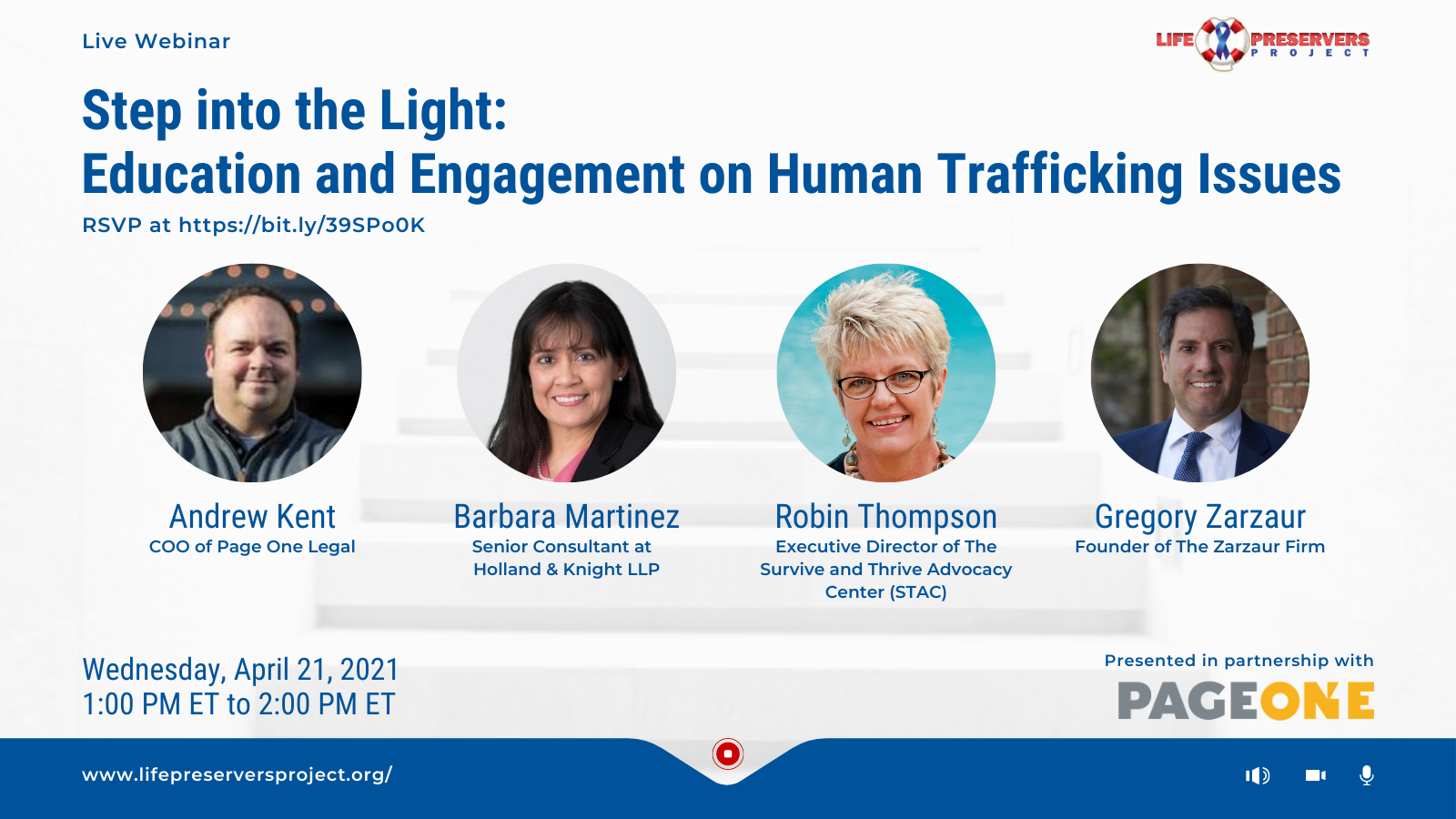 Life Preservers Project and Page One Legal invite you to join us for a panel presentation on stepping up action against trafficking of human beings in the digital age.

The purpose of the webinar is to share information on how to make better use of existing tools and garner relationships with law enforcement and legal professions to prevent and combat human trafficking in the digital age.  We will discuss key challenges in identifying victims, investigating cases, and prosecuting perpetrators of human trafficking offenses committed with the use of information and communication technology, human rights challenges linked to the use of technology in tackling trafficking in human beings, and how governments and international organizations can strengthen collaboration with businesses and civil society.

Andrew currently serves as the Chief Operating Officer for Page One Legal in Nashville, TN. Andrew has spent over 15 years in the eDiscovery and litigation industries after receiving his BA from the University of Wisconsin and his JD from the Catholic University of America, Columbus School of Law. In his role as Chief Operating Officer at Page One Legal, he is responsible for leadership accountability, removing obstacles and problem solving, and integrating all major functions between departments as well as handling all day-to-day functions. The idea that eDiscovery workflows and technology can be used to reduce the burdens of discovery and empower litigants to focus on case merits is his driving force. He has hosted numerous webinars including the Virtual One Conference, The 15 on the 15th, and the Litigator’s Lunch.

Prior to joining Holland & Knight last year, Ms. Martinez served as the Chief of the Special Prosecutions Section at the United States Attorney’s Office for the Southern District of Florida in Miami. In this capacity, she tried human trafficking cases and supervised federal prosecutors who handled cases involving international and domestic human trafficking, money laundering, child exploitation, extortion, international kidnappings, and other transnational crimes. Ms. Martinez was also the Human Trafficking Coordinator and the Project Safe Childhood Coordinator for the Southern District of Florida for more than a decade. As the Coordinator for these programs, Ms. Martinez spearheaded coordination efforts between law enforcement, prosecutors, non-governmental organizations, and private industries to more effectively prevent and identify human trafficking and child exploitation, as well as to investigate and successfully prosecute cases. She teaches a human trafficking seminar at the University of Miami School of Law.

Some of her notable honors and awards include: 2020 Leadership and Advocacy Resilience Award from Ark of Freedom Alliance for her anti-trafficking work; 2018 Attorney General’s Award for the prosecution of a case involving sex trafficking of minors in Honduras; 2018 Dade County Bar Association’s Women of Distinction Government Award; 2016-2017 Harvard Law School Wasserstein Public Interest Fellow; 2015 Director’s Award for Superior Performance as an Assistant United States Attorney for the prosecution of a sex trafficking case involving more than 50 adult victims; 2013 Women in Federal Law Enforcement’s Top Prosecutor Award; and Department of Justice’s 2011 Outstanding Overall Partnership Coalition Group Award for her work and contributions on cases involving domestic sex trafficking of minors.

Robin Hassler Thompson, M.A., J.D., is the Executive Director of the Survive and Thrive Advocacy Center (STAC), non-profit agency she co-founded in 2015 to assist survivors of human trafficking. She also is an active member and co-chairs the Social Services Committee for the Big Bend Coalition Against Human Trafficking. Robin’s consulting firm, Robin H. Thompson and Associates, represents a wide range of clients including the FSU Center for the Advancement of Human Rights where she assists in the Center’s work on human trafficking.

In 2001, she traveled to Bangladesh as a part of a U.S. State Department mission, which included a site visit to a trafficking rescue shelter in Dhaka – this trip inspired her work to help build awareness about human trafficking. From 2002 to the present, she has directed numerous local and statewide anti-trafficking projects. Robin has lectured extensively on the topics of violence against women and human trafficking. She is a contributor to numerous national and international publications and curricula including a domestic violence and human trafficking on-line Continuing Medical Education (CME) course for the Florida Medical Association.

In addition to her anti-trafficking work, Robin’s areas of expertise include domestic and sexual violence law and policy analysis, Violence Against Women Act implementation, adult domestic violence fatality reviews, workplace violence law and policy and health care issues. Robin has served on and held leadership positions on local, state and national boards and committees and has chaired the local Leon County Commission on the Status of Women and Girls, where she lives in Tallahassee, Florida.

Gregory Zarzaur dedicates his law practice to representing crime victims in civil litigation and increasing awareness of crime victim rights within both the civil and criminal justice system. His work is inspired by the courage and resolve of the survivors he represents.

When not in the courtroom fighting for his clients, Greg is active in educating his colleagues and victim advocates about the civil remedy provisions within state and federal human trafficking laws that can be utilized to directly support survivors. Over the last twenty years, Greg’s goal has stayed consistent: earn the trust and respect of his clients, the Court, and his opponents. Greg is a proud husband and father. He is an avid fan of the University of Notre Dame where he was a walk-on football player under Hall of Fame Coach Lou Holtz.

Brought to you in partnership by: