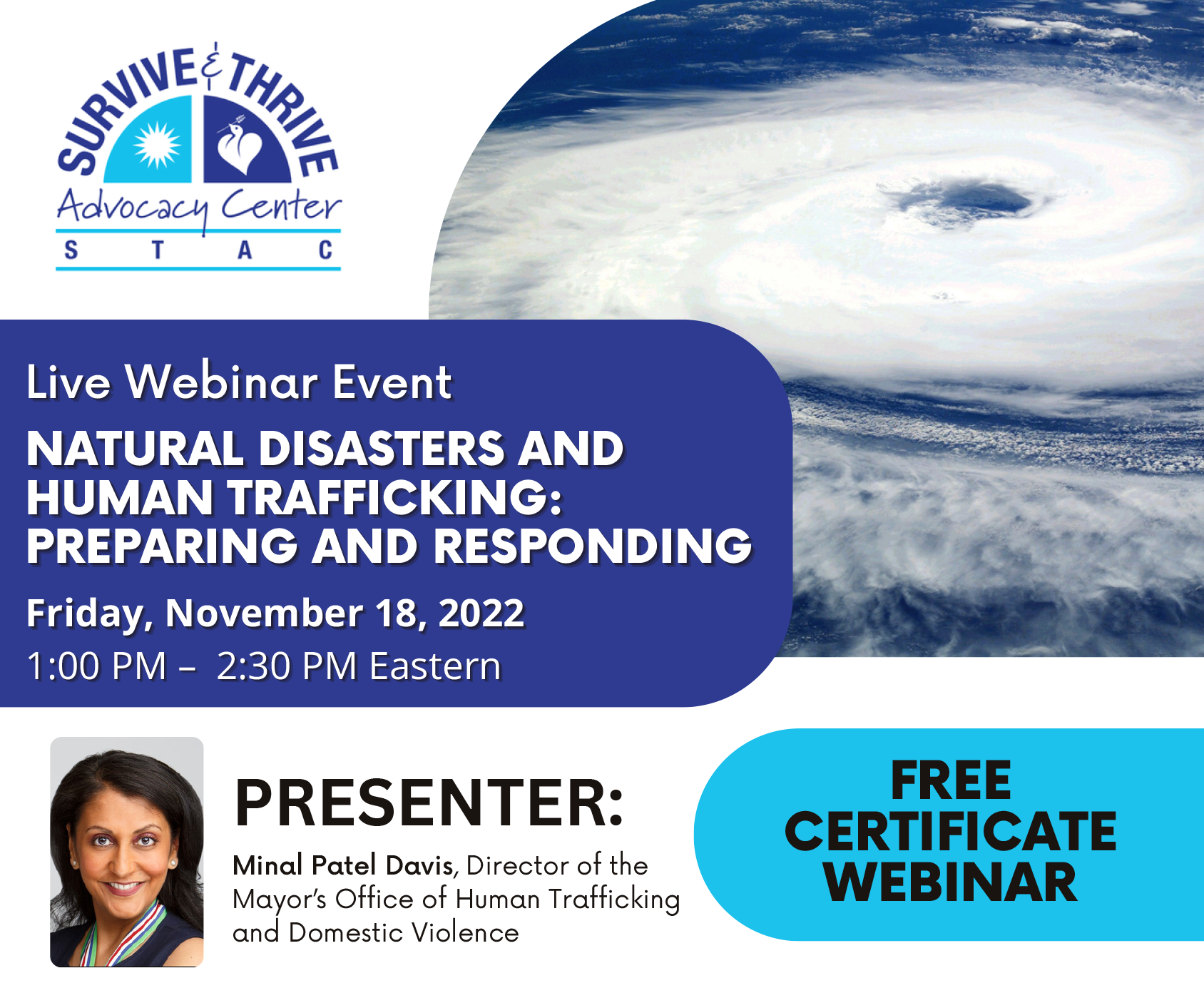 This FREE webinar is one of the “Third Friday” community training events hosted by BBCAHT and STAC to inform and engage the North Florida community and beyond. We are happy to extend this invitation to friends and colleagues – please join us!

After natural disasters, human traffickers take advantage and lure people into sex and labor trafficking situations, exploiting their need for shelter, food, work, and safety. During this session we will explore the intersections of human trafficking and natural disasters and how to best respond, including learning about how the City of Houston can be a model for communities nationwide.

Presenter: Minal Patel Davis, Director of the Mayor’s Office of Human Trafficking and Domestic Violence. Previously Special Advisor to the Mayor on Human Trafficking, she held the first municipal-level position of its kind in the U.S.

Sponsors: STAC in affiliation with Big Bend Coalition Against Human Trafficking and the International Rescue Committee.

Speaker Bio: Minal Patel Davis is the Director of the Mayor’s Office of Human Trafficking and Domestic Violence, Chairs the Houston 2026 Men’s FIFA World Cup Bid Committee’s Human Rights Sub-Committee and was previously Special Advisor to the Mayor on Human Trafficking, the first municipal-level position of its kind in the US. Davis was charged with making a local impact on human trafficking in the 4th largest city from a policy-level perspective and by advancing systems change. She developed and implemented Mayor Turner’s Anti-Human Trafficking Strategic Plan, dubbed the first comprehensive municipal response to human trafficking by a US city. Davis is passionate about helping other cities and designed the Ten/Ten Human Trafficking Response Municipal Fellowship, a 2-day immersion program for Mayor’s Offices across the US and abroad. This replicated model spans across city departments that range from airports, health, police, procurement, and neighborhoods. As Chair of the Bid Committee’s Human Rights Sub-Committee, she engaged 100+ stakeholders in less than four months across eight topics during the bid process to craft a human rights response and helped secure host city designation. She is a past speaker at the United Nations World Humanitarian Summit and Organization for Security and Cooperation in Europe. Her work has been covered in the Washington Post, New York Times, and numerous other national and international outlets. Davis is a recipient of the prestigious Presidential Award for Extraordinary Efforts to Combat Trafficking in Persons. Davis received her JD and MBA from University of Connecticut and a BA from New York University.