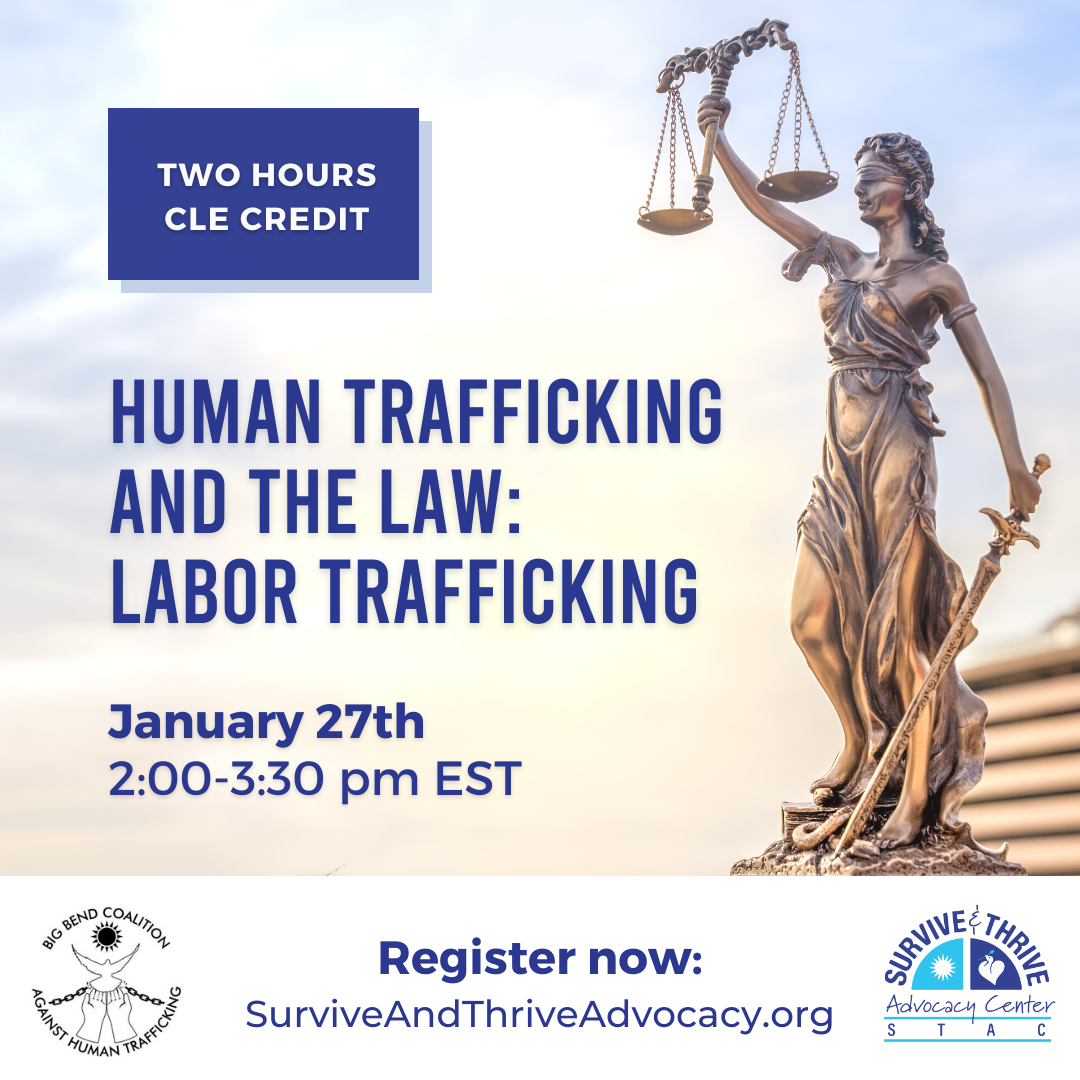 Description: Labor trafficking – also called “forced labor” is far more common that people think, here in North Florida and around the nation. Both the civil and criminal sides of the justice system – and our entire community – are vitally important to recognizing this reality, preventing forced labor, and fully supporting survivors. This includes active civil litigation against traffickers and taking action in the courts to ban goods coming into the U.S. from “supply chains” of forced labor. Each of us, as consumers, can also help by buying and supporting trafficking free goods and services.

Prior to becoming an OSF Fellow, Vandenberg served as a partner at Jenner & Block LLP, where she focused on complex commercial litigation and internal investigations under the Foreign Corrupt Practices Act. She served as a senior member of the firm’s Pro Bono Committee.

Vandenberg has spent two decades fighting human trafficking, forced labor, rape as a war crime, and violence against women. She has represented victims of human trafficking pro bono in immigration, criminal, and civil cases, and has testified before the Senate Judiciary Subcommittee on Human Rights and the Law, the Helsinki Commission, the House Foreign Affairs Committee, and the House Armed Services Committee on an array of human rights issues. Through the Human Trafficking Legal Center, she has trained more than 3,600 pro bono attorneys nationwide to handle human trafficking matters.

A former Human Rights Watch researcher, Vandenberg spearheaded investigations into human rights violations in the Russian Federation, Bosnia and Herzegovina, Uzbekistan, Kosovo, Israel, and Ukraine. She is the author of two Human Rights Watch reports, “Hopes Betrayed: Trafficking of Women and Girls to Post-Conflict Bosnia & Herzegovina for Forced Prostitution,” and “Kosovo: Rape as a Weapon of ‘Ethnic Cleansing.’”

As a researcher for the Israel Women’s Network, she investigated and published the first report documenting human trafficking into Israel. While living in the Russian Federation in the 1990s, she co-founded Syostri, one of Russia’s first rape crisis centers for women.

Vandenberg has received multiple awards for her leadership against human trafficking. In 2012, the Freedom Network USA presented her with the Paul and Sheila Wellstone Award for her “outstanding leadership and dedication in working to combat human trafficking and slavery in the United States.” In 2013, she received the Harry S. Truman Scholarship Foundation’s Stevens Award for outstanding service in public interest law. T’ruah presented her with the Raphael Lemkin Human Rights Award in 2014. She received the Katharine & George Alexander Law Prize the following year. Vandenberg also served as a co-chair of the International Bar Association’s Human Trafficking Task Force.

A Rhodes Scholar and Truman Scholar, Vandenberg has taught as an adjunct faculty member at the American University Washington College of Law and the Oxford University Human Rights Summer Program. She is admitted to practice in New York and the District of Columbia.

Fainess Lipenga has been an active member of the National Survivor Network since 2013. As a survivor of labor trafficking, she uses her voice and experience to educate the community and raise awareness.

Her mission is to prevent other survivors from being re-victimized and give them hope and courage to heal, become leaders, and achieve their dreams. Prior to her role as training advisor, Lipenga served as a consultant to the Human Trafficking Legal Center for more than five years.

Lipenga has testified before Congress regarding the challenges that survivors face, and has presented to the National Academies of Sciences, Engineering, and Medicine. She has provided training for pro bono lawyers, law students, physicians, law enforcement officials, and federal prosecutors. She has spoken at national conferences and developed expert training materials. In 2019, Lipenga testified before the Maryland General Assembly to advocate for passage of the Anti-Exploitation Act. With the help of her testimony, Maryland passed the bill, making labor trafficking an illegal act for the first time in Maryland.

Lipenga is a recipient of the Justice for Victims of Crime Award from the U.S. Attorney’s Office of Washington, DC. She believes survivor voices and leadership are essential to advocacy on human trafficking.

Daynica Harley is a clinical professor in the Florida State University College of Law Public Interest Law Center. Co-teaching the Children’s Advocacy Clinic and Human Trafficking and Exploitation Law Project, Ms. Harley supervises student advocacy and direct representation of clients across a variety of legal issues. Ms. Harley is a 2021 graduate of the Florida State University College of Law. She is admitted to practice law in Florida.

Melody Andrews is a third-year law student at the Florida State University College of Law. She also attended undergrad at Florida State and earned her Bachelor’s in Theater and Creative Writing. She is dedicated to Public Interest and has been involved in the Children’s Advocacy Clinic, the Human Trafficking and Exploitation Law Clinic, and the International Human Rights Clinic. She is currently a legal intern at Disability Rights Florida and the Public Defender’s Office in the 2nd Judicial Circuit. She has previously been an intern at the Florida Council Against Sexual Violence.

Peyton Smith is a third-year student at the Florida State University College of Law. She went to Taylor University, a small Christian college in Indiana, and studied Political Science, Philosophy, and Economics. She is passionate about immigration and international human rights issues. In the Fall of 2021, Ms. Smith participated in the Human Trafficking and Exploitation Law Project. Prior to law school, Ms. Smith spent six months doing anti-human trafficking work in Nepal.

Robin Hassler Thompson, M.A., J.D., is the Executive Director of the Survive and Thrive Advocacy Center (STAC), an anti-trafficking non-profit she co-founded in 2015. She co-chairs the Big Bend Coalition Against Human Trafficking and is a member of its Social Services Committee. In 2001 she traveled to Bangladesh on a U.S. State Department mission, which included a visit to a trafficking rescue shelter in Dhaka. This so inspired her that since, she has directed and collaborates in many anti-trafficking projects, trains extensively, and has authored publications and curricula, including a course for the Florida Medical Association.

CLE credit: This program has been approved for 2 hours of general CLE credit.

***Note: All BBCAHT members who wish to attend events Must register. ***